Tributes pour in for Australian naturalist Steve Irwin, dead at 44 after a freak accident involving a stingray.

I’m not looking forward to explaining that to the kids.

The unfortunate Mr Irwin is just the latest in a long line of wildlife documentarians to meet sticky ends at the vengeful hands of Mother Nature, such as Gerald Durrell (crushed by a python), Johnny Morris (lured out into the garden by a parrot imitating his wife, and then eaten by foxes), David Attenborough (buggered to death by gorillas, tho’ could be they got the wrong Attenborough), and David Bellamy (choked on a badger).

Of that generation of TV nature-lovers, only Bill Oddie survives. He is kept under 24-hour seclusion in a specially fortified safe-house in Birmingham, where no bird outside of fried chicken has been seen for at least twenty years. And frankly, if one has nothing but a life-sentence in Birmingham to look forward to, one might very well envy the dead. Death - unlike a ray – can eventually lose its sting… 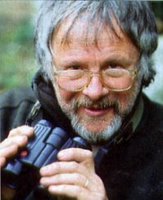 Bill Oddie in happier days, yesterday. If you want to know why they call them twitchers, sneak up behind him and go “cheep”.
Posted by Ivan the Terrible at 6:26 AM

May Bill Oddie reign forever. Oh go on, guess who my favourite Goodie was?

Are your children familiar with the notion of Russian roulette? For then it's easy to explain to them what happened to the khaki-clad rouletteer.

Or you can make it educational and tell them he forgot to put on sunscreen, and a ray did him in. No need to know it wasn't a sunray.

Bill Oddie is the product of a metally unstable mother and an emotionally crippled father. I have no idea why I posted that. It's random and irrelevant but I think it explains his life and actions on the Goodies (which by the way should be ressurected). Are the other two still alive?

I meant mentally not metally. Is there such a word as metally?

A fan of '80s Metallica may conclude a love letter to his sweetheart with the inimitable "Metally yours." I suspect intra-company memos at the former US Steel might have ended up on the same note.

But the real question to ponder here is: given the recent effusive outpour over the Croc Hunter's early demise over here in them States, is Steve Irwin well on his way to becoming America's People's Princess?

God no, Des. Steve Irwin worked for a living...

Irwin had balls in confronting those predatory beasts, even though he only shouted at them. Any fool can watch birds twitter. And Johnny Morris? All he did was funny voices.

Some would argue that Diana had balls as well. Obviously hers weren't as attractive as the very unappealing Camilla-farking-ugly-Bowelmovement's!

Oh PLEASE PLEASE tell us what Ben Fogle is going to die of.