Where the wild things are

More on the subject of inter-species adoptions, as my attention is directed to Pyrénée, a charming work by Philippe Sternis about a young girl raised by a bear. Petit à petit, j'ai trouvé les caractéristiques graphiques de Pyrénée, de l'ours et de l'aigle… Sternis informs us breathlessly in an interview.

Being French, they bang on at length about la beauté de l'histoire, la simplicité et la profondeur des dialogues, la poésie du dessin, and I’m sure we all agree with those fine sentiments. But they take an interminable length of time to get to what for anyone else would be the first question asked… why is the poor creature butt-naked throughout? Sternis acknowledges his debt to Kipling’s Jungle Book, but even Mowgli had a loin-cloth. Those raised by wolves are indeed typically naked, but somehow one expects better things from bears.

Sternis says he and his partner saw her as a fée clochette (the sort of fairy who lives in bell-shaped flowers), which is probably enough to get them banned from a teaching post in any British school. Win-win for them, then.

Humans have long had complex relationships with bears – Grizzly Adams was notorious in going beyond what one would consider the limits of normal interaction. One can see his point – presentable females were thin on the ground among those untamed peaks, and I dare say he saw it as an elegant combination of the sex and the fur rug, needing only to supply the roaring fire. Fortunately, Pyrénée bolts back to civilization before anyone thinks to develop the plot in so unhealthy a direction in her case. 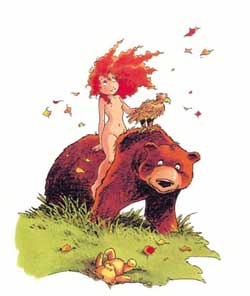 Pyrénée yesterday. She’ll catch her death like that, so she will…
Posted by Ivan the Terrible at 8:42 AM

I hate to think of the fleas on that bear.

Fortunately, they'd freeze to death on the poor little mite, so no harm done.

A man who faced down a charging grizzly said that what stuck him the most was its overpowering smell. It's strange that creatures with such an acute sense of smell should need to have such a strong body scent.

In fairness to the bear, that was probably just halitosis. A steady diet of obese Americans would be enough to upset the steadiest of stomachs...

Pyrénée gets a blog entry

July 10: I've just come across this blog entry by 'Ivan the Terrible about the Pyrénée graphic novel. The author seems to take a satirical view of Pyrénée's nudity, which he justifies by claiming that even Mowgli wore a loincloth. Well, not wishing to pour cold water on your argument, Ivan, or should I call you Mr. The Terrible? In Kipling's original stories, Mowgli was usually naked too. Admittedly, the Jungle is a bit warmer than the mountains, but Pyrénée does have the bear to keep her warm. And that’s most decidedly all he does!

Welcome Leem - and thank you. You do my cynical scribbles too much honour :)

I do like Pyrenee, by the way. The French cover more ground in their bandes dessinee than we do in our anglophone comics, I think. Or maybe it just sounds more profound 'cos it's in French. That's pretty much how Sartre faked it, after all...